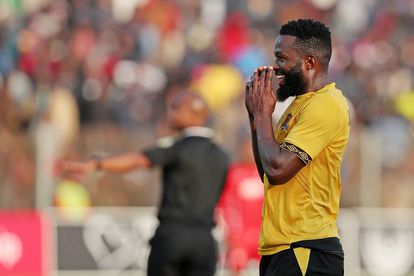 Mwape Musonda of Black Leopards reacts after missing a goal during the Absa Premiership 2018/19 match between Highlands Park and Black Leopards at the Makhulong Stadium, Tembisa on 09 August 2018 ©Muzi Ntombela/BackpagePix

Mwape Musonda of Black Leopards reacts after missing a goal during the Absa Premiership 2018/19 match between Highlands Park and Black Leopards at the Makhulong Stadium, Tembisa on 09 August 2018 ©Muzi Ntombela/BackpagePix

The race for the PSL is as tight as ever, with three teams well and truly in it and, in terms of individual glory, the country’s top marksmen are in a battle of their own as they compete for the golden boot.

The local league has, for some time now, not seen a flurry of goals coming in from all directions, and it’s no different again this year, as no one is yet to reach double-figures, despite being over halfway through the season.

The previous campaign saw two players – Percy Tau and Rodney Ramagalela – finish as joint top goal-scorers with 11 goals apiece, and that figure looks likely to be bettered ever so slightly this time around.

The last time a player notched up 20 goals was in the 2011/12 campaign, where a 34-year-old Siyabonga Nomvethe grabbed the golden boot in the colours of Moroka Swallows.

The veteran striker is still active, playing for AmaZulu, but is 18 short of that mark.

There is, however, one man within a long shot of getting there, after the 15-goal mark was cracked for the first time in the 2018/19 season since seven years ago.

Bonginkosi Ntuli has remained the lifeblood of AmaZulu, bagging eight goals in the league so far.

With proven goal-scorers in the likes of Peter and Tendai Ndoro in Highlands Park’s books, goals have instead come via an unlikely figure in Mothobi Mvala, who is a contender for the golden boot, despite playing out from the heart of the midfield.

It’s been a breakthrough season for 22-year-old Tshegofatso Mabasa, who now has eight goals so far.

Gift Motupa finished last season among the league’s leading goal-scorers, while on loan at Baroka from Orlando Pirates.

In the colours of Bidvest Wits, he has notched up eight goals, including four in his last three matches

The Zambian striker flopped at Orlando Pirates and Golden Arrows in his previous stint in the PSL, and found himself in the first division with Black Leopards.

In Lidoda Duvha’s return to the top flight, Musonda started out slowly, before an impressive burst, which has seen him bag 15 goals – the first player to do so in the PSL since Nomvethe’s exploits seven years ago.