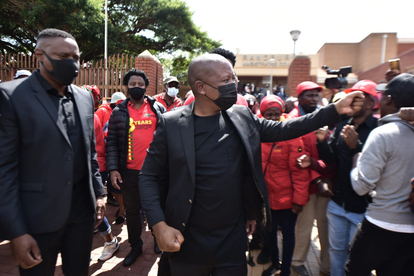 The EFF is adamant that failure to comply with safety regulations is to blame for the damage at Parliament. Image: EFF/ Twitter

The EFF is adamant that failure to comply with safety regulations is to blame for the damage at Parliament. Image: EFF/ Twitter

The PSL has reached boiling point with the EFF and South African Football Players Union launching a strike against the PSL, demanding the long-awaited return of fans to stadiums.

EFF AND SAFPU STRIKE AGAINST THE PSL

“The time is now! Welcome back the fans to the stands and regenerate livelihoods in the name of football,” EFF’s statement read on iDiskiTimes.

It has been almost 2 years since supporters were allowed into the stadiums.

The PSL enduring R9 million in losses and SA’s biggest sports event, the Soweto derby has lost millions in revenue and viewership.

SAFPU JOINS EFF IN PROTEST AGAINST THE PSL

“SAFPU will unite in the picket hosted by the Economic Freedom Fighters (EFF) and pledge our support in getting the gates of stadia across the country open, pleading for the support the players need and making a way for fans to enjoy the game they love, not off a screen but in person.”

“The status of locked doors and keeping fans at bay needs to be done away with. It is time to allow the fans back and with that the regeneration of small informal businesses that have lost valuable income during the dark months of lockdown. These very businesses kept their families afloat and benefitted very little from the resource that there was to apply for redemption,” stated SAFPU Secretary General Nhlanhla Shabalala.

It is a shared believe amongst South African’s, the EFF and SAFPU that far more fans can be allowed into the stadiums while adhering to Covid protocols such as social distancing, sanitizing, screening and wearing masks.

“In the name of football, let the fans support their teams fully in outdoor stadia that are big enough to social distance and keep safe, the FNB Stadium is about 90 thousand seater venue. Allow fans back, not to capacity but enough so that the stands are filled in the safest possible number, which exceeds the current provision of 2000 people allowed. Outdoor venues should not pose a problem,” Shabalala explained.

Hopefully, fans will finally be able to return so we can see Kaizer Chiefs and Orlando Pirates supporters selling out the Soweto derby once more – fingers crossed Mzansi!