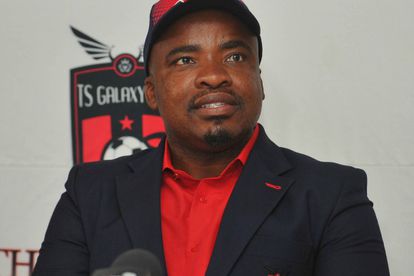 TS Galaxy owner Tim Sukazi has made some rather serious allegations of match manipulation in the Premier Soccer League (PSL)!

According to the outspoken club boss, referees are being mandated to make unfair calls against his side!

“I saw it last week when we played SuperSport United in the PSL. We dominated them inside out but Thando Ndzandzeka (referee) decided the game.” Tim Sukazi told Sports Night Live.

“You can see it in their eyes when a referee has been briefed. I can see through them. I saw that Thando Ndzandzeka was on a brief and I told the officials of SuperSport before the game that, ‘guys, this game is in your favour and the referee will decide it for you.’”

We have dominated our opponents – Sukazi

“I still stand by my statement. But had I known that circumstances outside the main game would show their ugly face during the course of the season.” the PSL club boss continued.

“We are the most red carded club. I don’t know, I have not seen it happen before. We play a good brand of football.

“Today in South Africa in the PSL the teams that play possession football and create chances of scoring are TS Galaxy and Mamelodi Sundowns.

“I am being honest. We have dominated every opponent we have played this year bar Sundowns.

“Had I known that we would be sitting with seven, eight or nine red cards, I can’t even keep up with the count, in 22 PSL games I would have told a different story.

“We are not a club that is unruly. With due respect, we are not like the Jomo Cosmos of old who had Andrew Rabutla and Linda Buthelezi in one team. If we were like that, then we would be deserving of these cards.”