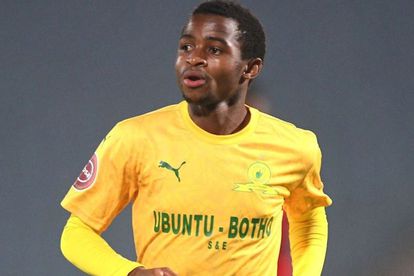 Promise Mkhuma is set to leave Mamelodi Sundowns having agreed to a deal in principle with Swallows FC who are rebuilding their squad following the exits of several key players.

Masandawana co-coaches Manqoba Mngqithi and Rhulani Mokwena have been looking Mkhuma since they took over from Pitso Mosimane who promoted the youngster in 2020.

According to SABC Sports, it’s not clear if the 22-year-old will be moving to the Birds on loan or on a permanent basis.

MKHUMA ON HIS WAY OUT OF SUNDOWNS

“It is understood the two clubs are expected to reach an agreement before the end of this week,” SABC Sports reported.

“Mkhuma’s representatives, Prosport International have been working on trying to get him a move away from Sundowns for more than a year now, with there having been talks with Cape Town City and SuperSport United in the past.

“But nothing ever materialised, and Mkhuma only managed one appearance last season – a 25-minute cameo in the Nedbank Cup and a statistic lamented by many within the football fraternity because of the forward’s immense potential.

“Indications are that Swallows have agreed a deal in principle for the striker to start afresh but it’s not yet clear whether this will be on loan or on a permanent deal.”

Another young player who recently left Mamelodi Sundowns is Keletso Makgalwa after he joined TS Galaxy on a season-long loan.