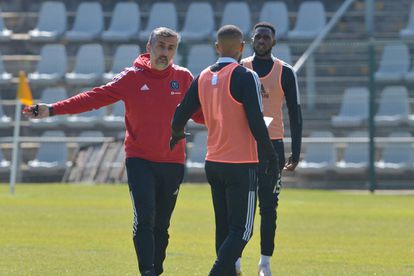 Orlando Pirates travel for their first away game of the season on Wednesday, 10 August as they make the trip to the Danie Craven Stadium. Photo: Twitter @OrlandoPirates

Orlando Pirates travel for their first away game of the season on Wednesday, 10 August as they make the trip to the Danie Craven Stadium. Photo: Twitter @OrlandoPirates

Orlando Pirates travel for their first away game of the season on Wednesday, 10 August as they make the trip to the Danie Craven Stadium for a clash against Stellenbosch FC in the DStv Premiership.

It’s a different test for Jose Riveiro’s troops, who square off against one of last season’s success stories following a successful first league outing at Orlando Stadium over the weekend.

The Buccaneers are among the four teams to have picked up maximum points in the opening weekend of the campaign, and come up against a Stellies side that kicked off their campaign in disappointing fashion after being held to a goalless draw by Marumo Gallants.

For Orlando Pirates, it will be a case of trying to build on a dominant performance against Soweto rivals Swallows on Saturday, while striving to be more clinical in front of goal after managing a solitary strike in their season opener.

Their opponents will be desperate to get their first win of the season after collecting a point on the road.

Stellenbosch are also one of several sides yet to add to their tally under the “goals” column, following what was a weekend of slim pickings in front of goal across the league.

Stellies missed the services of Venezeulan midfielder Juan Carlos Otiz in their goalless draw against Gallants, with the player still recovering from a knee injury picked up towards the end of the previous campaign. The 28-year-old is likely to remain sidelined on Wednesday.

Coach Steve Barker could hand debuts to the likes of Congolese international William Likuta, who joined prior to the start of the new season.

With a quick turnaround between games, Orlando Pirates’ technical team could also shuffle the pack for their midweek assignment in order to keep some legs fresh for what is a congested fixture list.

Players such as Olisah Ndah, Kwame Peprah and Bandile Shandu sat out Saturday’s win over Swallows, and might be involved on Wednesday night, while Miguel Timm and Evidence Makgopa will both be eyeing their debuts in Bucs colours.

Deon Hotto (Orlando Pirates): The Namibian international seems to enjoy playing against Stellenbosch, whom he netted three goals against last season. Possessing enough pace to trouble any defender, the threat posed by Hotto is not only found in open play where he creates and finishes off chances, but also through set-pieces with his trusted left-foot capable of producing magic from near-impossible angles.

Junior Mendieta (Stellenbosch FC): Having bid farewell to a number of their stars during the offseason, Stellenbosch will be pleased to have held on to the Argentinian so far, as the player has been the heartbeat of his side on attack. Capable of operating on either wing as well as in the middle, the 29-year-old has provided vital goal contributions for the Club, and a solid performance from him in midweek could mean a busy afternoon for the Bucs defence.

Orlando Pirates and Stellenbosch engaged in a couple of high-scoring affairs last season, scoring seven times in their two league fixtures with the Soweto giants accounting for the bulk of the goals.

The Buccaneers will have fond memories of their last visit to Danie Craven Stadium, where they netted three unanswered goals with Deon Hotto netting a brace, while Collins Makgaka provided the game’s other goal. The reverse fixture played at Orlando Stadium earlier in the season was a far tighter affair, as goals from Hotto and Goodman Mosele proved to be not enough to hand the hosts on the day all three points, with the two teams finishing on two goals apiece.

Spoils have been shared three times in the six league clashes so far between these two sides, with Orlando Pirates winning twice and suffering a solitary defeat which came in their first ever encounter with the men from the Cape Winelands.

The match is scheduled to kick off at 19:30 and, as always, the very best place to follow the action LIVE will be on The South African website.