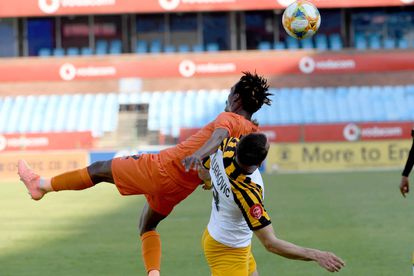 Log leaders Kaizer Chiefs came from 2-0 down to clinch a 3-2 win over Polokwane City at Loftus Versfeld on Saturday.

The Glamour Boys came into the fixture looking to capitalise from a slip-up by Mamelodi Sundowns and open a considerable gap from the top of the standings.

Rise and Shine had a brighter start to the contest, immediately asking questions of Amakhosi shot-stopper Daniel Akpeyi.

The in-form Samir Nurkovic looked to add to his goal tally in the eighth minute, as he was allowed unleash a volley which crashed into the side-netting.

City took the lead in the 17th minute when the Chiefs defence was caught flat-footed. Lesiba Nku capitalised from the sheepish defending, lobbing the ball over Akpeyi into the back of the net.

Three minutes later, Salulani Phiri had a golden opportunity to double the lead as his shot beat the Nigerian keeper before rolling agonisingly wide.

Watch Phiri miss in video below:

At the other end, Cyril Chibwe pulled off a stunning save from a point-blank Nurkovic header, after the Serb was left unmarked inside the box.

Mohammad Anas could have sent City into the break 2-0 up, but fluffed his lines with his shot going past the far post.

The second half began with a bit of sparring from the two sides, with neither making a decisive incision into the other’s territory.

This carried on for the first 15 minutes, and it took a piece of magic from the men in orange to bring the contest back to life.

City sowere awarded a free-kick some yards outside the Chiefs box, which was taken by the experienced Jabu Maluleka.

The 38-year-old’s effort caught a deflection from the Amakhosi wall, which placed it out of Akpeyi’s reach into the top corner.

Watch Stunning free-kick from Jabu Maluleke in video below

Chiefs pulled one back just ten minutes later, with Willard Katsande heading in from a corner to ensure a tense finish.

The equaliser came soon after in almost similar fashion, this time directed in by Akumu Agay, who grabbed his first in Kaizer Chiefs colours.

The comeback was completed just six minutes after Amakhosi got into the scoresheet, with Nurkovic beating Chibwe to make it 3-2, in the process grabbing his 13th for the season.

Lazarous Kambole, who is yet to get on the scoresheet since his move to Naturena, could have broken his duck with the goalkeeper out of the picture. However, the Zambian striker was denied as his shot was cleared off the line.

Young Keletso Sifama was introduced in place of Nurkovic, who was named man of the match, and his first action of the game saw him get fouled in the box, with the referee awarding a penalty.

Daniel Cardoso stepped up, beating Chibwe with a powerful shot, but his effort crashed into the crossbar.

However, Chiefs had done enough to secure victory as they steer six-points clear of second-place Mamelodi Sundowns, while City sink deeper into trouble in the relegation zone.