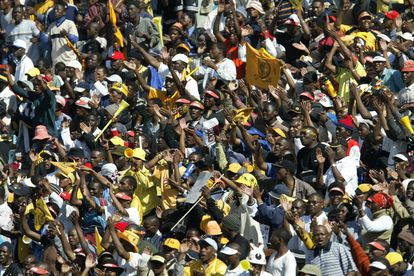 Between 1986 and 2010 the South African domestic football season kicked off with a one-day four-team tournament.

Telephone votes were taken to determine which four teams would take part in the event which was usually staged at the FNB National Stadium, although it was first staged at Ellis Park.

The four clubs chosen to participate were drawn into two semi-finals, played one after the other.

The two winning clubs then play in the final, later that same day.

In the event of draws matches would go straight to a penalty shootout.

When the tournament was scrapped in 2011, PSL Chairman Dr Irvin Khoza, said the competition had “outlived its usefulness”.

The tournament has effectively been replaced by the Carling Black Label Cup contested by South Africa’s two most popular teams, Kaizer Chiefs and Orlando Pirates.

Have your say on the Charity Cup