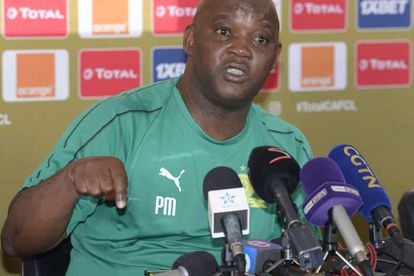 Pitso Mosimane (Coach of Sundowns) during the Mamelodi Sundowns press conference at Lucas Moripe Stadium on May 03, 2019 in Pretoria, South Africa. (Photo by Lee Warren/Gallo Images)

Pitso Mosimane (Coach of Sundowns) during the Mamelodi Sundowns press conference at Lucas Moripe Stadium on May 03, 2019 in Pretoria, South Africa. (Photo by Lee Warren/Gallo Images)

The 25-year-old was the toast of the nation during the recent Africa Cup of Nations in Egypt, when his late strike knocked the host nation out of the tournament in the round of 16.

This was after fans had been calling him to be included in the Bafana starting XI, following an uninspiring start to the campaign.

The Buccaneers heeded the call in fine style in what was his first international start, to take his country to the last eight, where they were eventually knocked out.

With the first Fifa international break of the season looming, Lorch has another opportunity to turn out in national colours, as Bafana travel to Lusaka to play Zambia in a friendly match.

Pitso has urged him to repeat the feat he pulled off in Cairo, to prove that he belongs in international football.


“We were asking for Lorch. Let Lorch convince us he is a national team player,” said Mosimane as quoted by KickOff.

“We saw the goal in Egypt but play another match and let’s see. Playing for the national team is not only one goal, not only a one-match performance, he has to do it every week. Lorch has the ability.

“So we were waiting for him, the country, we were excited. I was also rooting and asking why he doesn’t get a chance. He got the chance and did the right thing, he scored. So he must score again in Zambia.”

This was after bagging 15 goals and five assists across competitions for Pirates, helping them finish second in the league behind Sundowns.

He was called up by former national coach Stuart Baxter, but had to bide his time throughout the Afcon group stage, which he spent on the bench, before his grand entrance against the hosts in the first knockout round.

After rejoining the Buccaneers, following Bafana’s exit, Lorch is yet to reproduce thethe form that made him the talk of the town, as he has been struggling with injury throughout the early stages of the new season.

The player came on as a sub when his club was held to a goalleas draw by Golden Arrows in their most recent fixture.