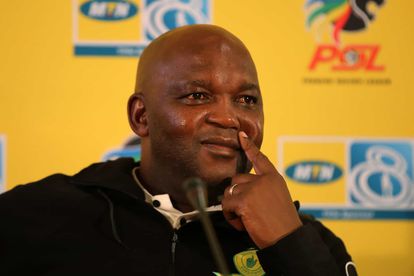 It’s pretty well documented that Mamelodi Sundowns have a number of players itching for game time, and a move away from the club could solve the problem – at least for one party.

The likes of George Lebese, Oupa Manyisa and Aubrey Ngoma have spent pretty much their entire stay in Chloorkop warming the bench, and have at times been linked with a possible exit.

However, according to coach Pitso Mosimane, the clubs interested in the players have to cough up some cash.

Pitso urges clubs to pay up

Speaking after Sundowns’ 1-1 draw against rivals Supersport United in the MTN8, Mosimane acknowledged that there are players looking for greener pastures, but stated that the club will not let them go without the necessary compensation.

“Some guys are unhappy because they want to play but unfortunately we have invested in these players. If you don’t play and want to leave‚ you are right to look after your career but the question is who wants you.

“If you have someone who wants you‚ how does he want you. A freebie‚ no because we paid for you and we have never failed to pay for any player at Sundowns. If you want to stay you must fight for your position and if you want to leave you want to pay for you.

“Some people want players for free‚ some we bought players from them and they come back for the same player but for free. I am not a businessman but I don’t understand this thing because it doesn’t make sense.

“It only happens in SA‚ if a player at Manchester United is not playing for whatever reason‚ there is always a team in the league willing to pick him up. Here in SA we wait until the last day of the transfer window to say maybe we can get something from Sundowns. Gone are the days of the freebies‚ they must stay here and fight for their positions.”

Quiet window for the Brazilians

In terms of players heading the other direction, Sundowns have had a relatively quiet window, signing just three players.

Uruguayan striker Mauricio Affonso was one of the recent signings, along with former Polokwane City midfielder Sammy Seabi and defender Nyiko Mobbie, who joined from the relegated Free State Stars.

The transfer window closes at midnight on Monday.

Something fishy: Thieves steal KOI FISH from pond in KZN