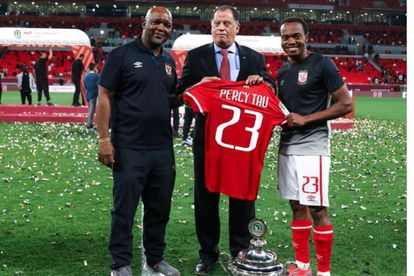 Pitso Mosimane and Percy Tau’s future plans have been REVEALED – at the same time, on the same day. We finally know their next moves…

Mosimane has been linked with a dream return to the PSL, a fantasized move to English Premier League giants Chelsea, a return to Al Ahly, African giants Simba SC and even the head coach role of countries like Iraq and Morocco.

In contrast, Tau has been linked with Le Havre in France and Soweto giants Orlando Pirates, who sent an official request to loan the Bafana Bafana star. However, none of these have materialized yet with the latest update coming right here, straight from The South African.

MOSIMANE TALKS ABOUT NEXT JOB

Mosimane is focused and dedicated on his Mosimane Schools.

He is passionate about his project and focused on developing the youth and the future stars of SA football. However, Mosimane seems to be leaning towards a return to coaching and he dropped a few exciting hints…

“I am just waiting for the right project because the mentality is not to jump at any offers at this stage of my career,” Mosimane explained on iDiskiTimes.

Mosimane is waiting for a well-structured offer from a side with a clear vision and plan. Keep in mind that Jingles wants to win AFCON or the CAF Champions League with a new side. Therefore, he is not closing any doors.

“I will not close any door and if the right project [from clubs or national teams] comes, then we’ll see where that takes us.” Mosimane added.

This means he is open to any team and could present a chance to sides like Kaizer Chiefs, Orlando Pirates, Mamelodi Sundowns, Royal AM and Cape Town City. While a move to Iraq or a top African country and a return to Al Ahly or a new opportunity with Simba SC or Wydad Casablanca remains on the cards.

Le Havre’s deal fell through and Ricardo Soares has just parted ways with Al Ahly. Meaning, Tau has an official loan offer from Pirates left. However, the Lion of Judah is nursing a long-term injury that could see him miss up to three months of action.

Therefore, the latest news coming out of Tau’s camp is that he will be staying at Al Ahly, according to Phakaaati. With a new coach likely to be hired, he could be given a new opportunity to kickstart his Al Ahly career. There are even rumours that Mosimane could return which would give Tau a much-needed new fresh start.

For now, though Tau will be remaining at Al Ahly.

Where do you think Tau and Mosimane will end up? Let us know in the comments section below.