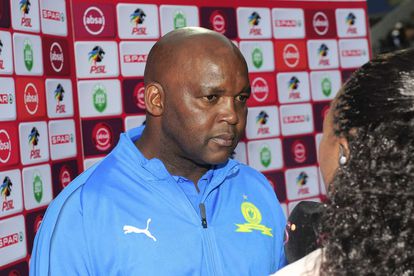 Mamelodi Sundowns coach Pitso Mosimane has at least one other thing to worry about, other than preparations for the Caf Champions League quarterfinal clash against Al Ahly on Saturday.

The 54-year-old is awaiting sanction from the PSL after being found guilty of violent conduct, following an altercation with an AmaZulu security official during his side’s 3-3 draw with the Durban outfit in September 2018.

He was accused of striking the guard, named Nathi Ngwenya, in the face when an altercation broke out during the match.

Following a lengthy process by the PSL Disciplinary Committee, the League revealed that Mosimane – along with Sundowns – had been found guilty of bringing the game in disrepute.

Ahead of the clash against the Egyptian giants, the former Bafana mentor finally broke his silence about the incident, denying any wrongdoing;


“I know my space and I am happy with my space because the guy spoke about it, the guy who I am supposed to have assaulted.

“It was a televised game, so where is the footage? I mean SuperSport has 18 or 16 cameras, so no one picked it up? I mean guys, I mean really you can’t miss that.”

Mosimane is set to hear his fate once all the parties – including Ngwenya and the club – have made submissions to the disciplinary committee.

Sundowns match against Al Ahly kicks off at 14:45 (SAST) on Saturday.