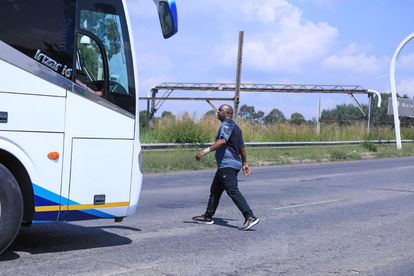 Former Mamelodi Sundowns coach Pitso Mosimane has slammed the club for their ‘dirty tricks’ ahead of their clash against Al Ahly yesterday!

The Brazilians edged the defending champions in a tense encounter at the FNB stadium on Saturday afternoon thanks to a solitary Peter Shalulile strike.

Despite going down on the field of play, what left Pitso Mosimane most irritated was the treatment his side recieved before the match got underway.

Al Ahly’s arrival the FNB Stadium was delayed by Mamelodi Sundowns fans en-route to the match with Mosimane himself having to help clear the path.

The former Masandawana coach has since lashed out at his former team for what he believes was well orchestrated tactics against him!

“I don’t want to talk a lot about Mamelodi Sundowns too much, I will tell you what happened even when we played Sundowns last week.” – Pitso Mosimane said as quoted by KingFut.

“Even now before every match, they’re still after me these people. They don’t want to leave me alone, I’ve moved on.

“You’ve got a good team, you’ve got three coaches. What do you want from Pitso Mosimane? Move on, leave me. I’m gone. I’ve done my best, I’ve given you a great team.

“Very dirty. I’ll reveal it one day. There’s a lot, too much. The game is played on the pitch. The goal is legitimate, no problem. Thapelo’s goal in Cairo is a good goal, why do you do other underhand stuff and all that?

The loss leaves Mamelodi Sundowns in pole position to qualify for the CAF Champions League knockout stages while for Pitso Mosimane’s Al Ahly, they’ll have to work hard in their remaining two matches to qualify.