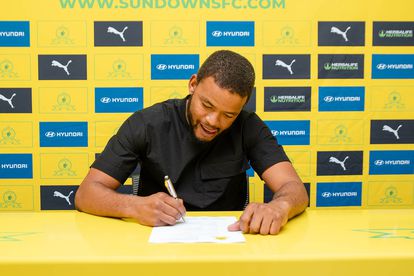 Mamelodi Sundowns have beaten Kaizer Chiefs to the signing of midfielder Sipho Mbule from SuperSport United the club confirmed on Friday.

Sundowns and Chiefs had been embroiled in what seemed to be a tug of war for Mbule’s services but, it is the Brazilians that have come out trumps.

After months of different stories, one saying the player favours a move to Chiefs, then another claiming that Sundowns are in the lead, the saga has now officially been put to bed. Mbule is confirmed to have signed on a three-year-deal at Masandawana, meaning that he will now reunite with his former midfield partner at SuperSport, Teboho Mokoena.

Mokoena, was another player who was thought to have been embroiled in a tug of war between Chiefs and Sundowns, with there also being noise about his preference to join Amakhosi. In the end, a Chiefs official did confirm that they were indeed interested in the player and even went as far as negotiating with his agent and SuperSport. However, just like was the case with Mbule, the player ended up going to Chloorkop.

Judging from the noises that were being made by Mbule’s agent Mike Makaab, it was perhaps no surprise that he ended up at Sundowns. Makaab, who interacts regularly with fans on Twitter constantly gave the impression that Chiefs were not willing to come to the party financially when it came for negotiations for Mbule. He then also made it clear that Ka Bo Yellow, were completely the opposite, and they did not take long to start negotiations for the player soon after the January transfer window shut.

This now means, Chiefs have missed out on both of their midfield targets from SuperSport to Sundowns, and it now remains to be seen how that will impact the two sides in the next season. Below are the first pictures of Mbule as a Sandawana.