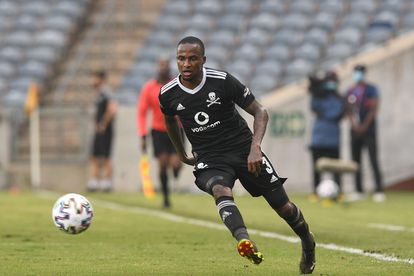 Thembinkosi Lorch is usually accustomed to showcasing his ability in front of fans, buy even with fans banned from witnessing his exploits, somehow they have managed to spot him on holiday.

What seemed to be most intriguing for the fans however, is that, although they had an idea of who Lorch’s female companion was, on this holiday, they failed to pin the Pirates star down as he continued to remain discreet with his posts.

But like the new adage says, “Never underestimate the power of social media” which is an adage that Lorch will now know all too well. All it took was one picture posted by the Pirates star in similar surroundings, to the fans “suspect” for social media to make the conclusion that the partner was indeed actress Natasha Thahane.

Now just how did the fans of Lorch and Thahane bust the duo?

2. Both Lorch and Thahane were spotted taking pictures with a similar door behind them, which gave the Twitter investigators even more of a lead as they edged closer to closing this case

3. Lorch and Thahane took a picture of a similar pool, with similar surroundings from similar angles.

4.The couple seemed to be spotted wearing similar wristbands by one social media investigator who zoomed in on both the wrists of Lorch and Thahane

5.Then finally the pictures that closed the case for social media detectives, as both Lorch and Thahane had a similar picture in similar looking waters. These are the two pictures that have been dominating social media.

Do Lorch and Thahane make a cute couple?

Let us know in the comments.