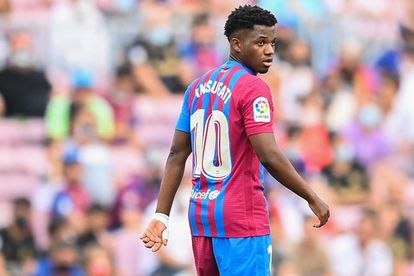 Fati was spotted by the Barcelona basketball club’s photographer in the Amakhosi cap, as he smiled and gave a thumbs-up to the camera.

Fati has recently succumbed to yet another injury, having only just recently returned to full fitness for Barcelona a couple of months ago.

Prior to his current injury, the 19-year-old forward had been sidelined for just under a year with a serious knee injury threatening to derail his career.

However, Fati would not allow the knee injury to have the final say as he returned to good effective, netting on his return at the Camp Nou.

Shortly after his comeback, he had actually suffered a less severe injury to the knee on his other leg this time. This injury occurred during Barcelona’s tense 3-3 La Liga draw against Celta Vigo, but the youngster was back in no time.

Now currently out with hamstring injury

Fati has now since suffered a hamstring injury which saw him pulling out of a Spanish national team return, on the same day club legend Xavi Hernandez was appointed Barcelona head coach. Now it remains unclear but rather highly unlikely that the Guinea-Bissau-born Spanish international star is aware, nor if he has any tangible affiliation to Chiefs, or it could just be due to an endorsement with Nike sports brand that also sponsors Chiefs apparel.

The two Soweto giants have both enjoyed a bit of ‘international love’ for their apparel so far this season.

Earlier in the year the All Blacks were spotted in the gym breaking a sweat in both the Orlando Pirates home and away jersey’s.

Then twice this year Arsenal legend Ian Wright has been pictured wearing their merchandise and even sending them a message ahead of the Soweto derby.

Does a Chiefs cap suit him?

How does he look in it?