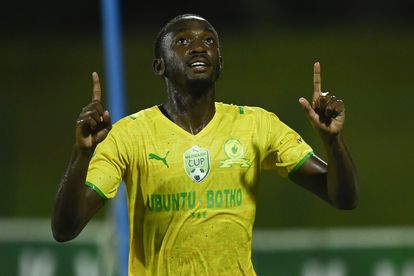 Mamelodi Sundowns co-coach Manqoba Mngqithi says striker Peter Shalulile is one of the most professional players he has ever worked with. Photo: Gerhard Duraan/BackpagePix

Mamelodi Sundowns co-coach Manqoba Mngqithi says striker Peter Shalulile is one of the most professional players he has ever worked with. Photo: Gerhard Duraan/BackpagePix

Mamelodi Sundowns co-coach Manqoba Mngqithi says striker Peter Shalulile is one of the most professional players he has ever worked with and his goal scoring exploits had nothing to do with luck.

To date in the 2021/22 DStv Premiership season, the 28-year-old Shalulile has scored 21 goals after most recently scoring a hat-trick in the 6-0 hammering of Golden Arrows on Tuesday.

In an interview carried by the Mamelodi Sundowns website, Mngqithi praised the Namibian striker’s commitment at training and overall professionalism as the reason behind his success.

“For me to summarise, maybe what I see from Peter, you know the gods of football, they also look at how much application you put into the game and the level of professionalism,” Mngqithi said.

“He runs the hardest in the team, he works very hard, and others would say that he’s lucky because when you find him in positions where he taps in, he scores with one touch or that little header here and there.

“It looks like this guy is very fortunate or he’s very lucky but for me when opportunity meets hard work a lot of people will say you’re lucky and that’s what happens with Peter, he works very hard and he’s probably one good example in our team that everybody else can follow suit.

“The team is working hard in general, but Peter is one of the most professional boys I’ve ever worked with. I don’t think he’s one of the most, really, really talented football players, but because he gives his heart and soul to his game and to his craft, that’s why God gives him what he’s good at.

“Sometimes I used to say that Peter is that guy who may not play very good football but he will score lots of goals in football. So you will choose what you want, if you want someone who will dribble, then Peter might not be the one, but if you want somebody to put the ball at the back of the net [then] Peter is definitely the one for that,” he added.