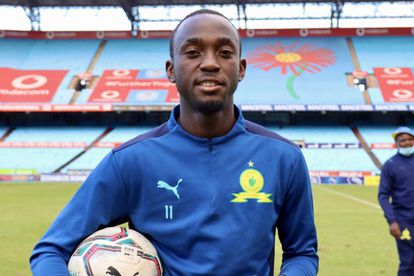 Thanks to his hat-trick against Golden Arrows on Tuesday, Shalulile took his tally for the season to 21, seven more than closest rival Victor Letsoalo of Royal AM.

Second-most is the 22 goals Zimbabwe’s Wilfred Mugeyi scored in the very first PSL-era season in 1996/97 for Bush Bucks who finished fourth that season.

However, in that season there were 18 teams – and 34 matches played per team – unlike today where the 16 teams play 30 matches.

Peter Shalulile’s tally is currently tied with South Africa’s Pollen Ndlanya who scored 21 goals for Kaizer Chiefs in the 1998/99 season which was also a 18 team / 34 match campaign.

Mamelodi Sundowns do have some tricky opponents to play in their final five matches of the season, but we won’t be betting against Shalulile adding to his tally!

Masandawana will next be in league action at home against Cape Town City FC on Wednesday, 27 March at 19:30.

Be sure to stay glued to The South African website for ‘LIVE’ coverage of Peter Shalulile’s quest for the Lesley Manyathela Golden Boot.