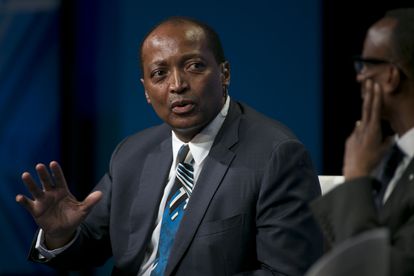 CAF chief Patrice Motsepe has confirmed that the Africa Cup of Nations (AFCON) will go ahead as planned in Cameroon next month. Photo: Prensa Internacional/ZUMA Wire

CAF chief Patrice Motsepe has confirmed that the Africa Cup of Nations (AFCON) will go ahead as planned in Cameroon next month. Photo: Prensa Internacional/ZUMA Wire

Patrice Motsepe’s bid for the Confederation of African Football (CAF) presidency has been deemed admissible.

As much was confirmed by the African football governing body this week.

MOTSEPE WAS AMONG 5 CANDIDATES FOR THE ROLE

The Mamelodi Sundowns president was among five candidates who officially stood after being endorsed by various federations around the continent to succeed incumbent Ahmad Ahmad.

Motsepe, a mining magnate and reportedly South Africa’s third-richest person, had his candidacy for the role approved and supported by the South Africa Football Association (SAFA) in November last year.

Other federations to have backed Motsepe include Botswana, Ivory Coast, Nigeria and Sierra Leone.

READ | KAIZER CHIEFS DRAWN WITH SUNDOWNS AND AL AHLY? IT COULD HAPPEN!

Following Ahmad’s FIFA ban, the Malagasy was deemed ineligible for the upcoming elections while the Governance Committee has cleared Motsepe and Ahmed Yahya from Mauritania after meeting at the CAF headquarters this week.

The meeting in Cairo, convened by president Michel Kizito Brizoua-Bi resulted, in the duo being deemed ‘admissible’ to stand for African football’s top job.

However, in a statement released by CAF, both Motsepe and Yahya will undergo further checks before a final decision is made.

“Their candidatures were deemed admissible. However, the committee considered that further checks are necessary before a final decision. To this end, a hearing of these candidates will be organised in Cairo on 28 January 2021,” read the statement.

SHOULD MOTSEPE WIN, HE WILL STAND FOR 4 YEARS

Augustin Emmanuel Senghor, the president of the Senegal FA, and Ivorian FA president Jacques Bernard Daniel Anouma are the only other names authorised to appear on the list of candidates after the committee ruling.

CAF will elect Ahmad’s successor as well as a new executive committee at the 43rd Elective Ordinary General Assembly on March 12 in Rabat, Morocco.

The new president will stand for a four-term period.

Should Patrice Motsepe win the election, he would have to step down from his role as president of 10-time PSL winners, Sundowns.

IN CLOSING | PERCY TAU COULD MAKE BRIGHTON DEBUT ON SUNDAY!