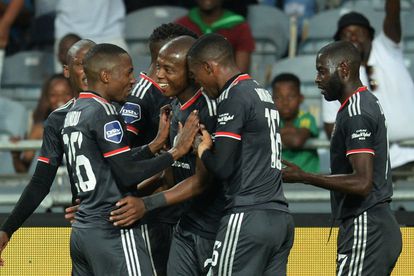 Orlando Pirates shot to the summit of the DStv Premiership log with a 2-0 win over TS Galaxy in a match played at Orlando Stadium on Saturday.

Zakhele Lepasa netted a first half brace to ensure that the Buccaneers temporarily occupy the the top spot.

And the formation proved effective as Lepasa opened the scoring through a deflected attempt as early as the sixth minute.

TS Galaxy looked out of shape from defence to their striking department with Pirates easily finding spaces behind them.

And in the 37th minute, Deon Hotto made a run behind the TS Galaxy defence, but the ball ended up in the back of the net as Lepasa‘s attempted chip beat Melusa Buthelezi.

That’s how the first half ended, and TS Galaxy knew they had a mountain to climb in the second half as Pirates hardly lose a game when they lead by a two-goal scoreline.

The second half saw a much improved performance by TS Galaxy, and this was after the introduction of Xola Mlambo and Keletso Makgalwa.

However, that steam lasted for a few minutes as Pirates again took control of the game by dominating the midfield through Miguel Timm and Thabang Monare.

Lepasa had a quiet second half but it was Hotto who stepped and took over as Pirates used the left-hand side to attack TS Galaxy.

For TS Galaxy, their decision-making in the final third let them down, and even debutant Bernard Parker was nowhere to be seen.

Ultimately, Pirates collected maximum points and ensured that they move top of the log with 14 points from eight games.