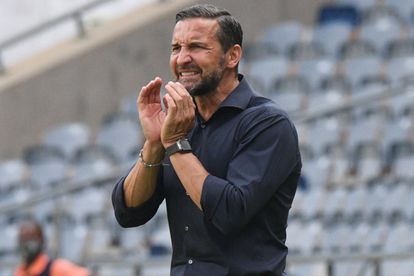 Orlando Pirates coach Josef Zinnbauer has all but confirmed the new striker that will be joining his team ahead of the new season.

As widely reported this week, Pirates are close to unveiling Kwame Peprah as their player following the striker’s arrival last weekend.

And Zinnbauer, without revealing the name of the striker, confirmed the presence of Peprah at Pirates, saying the 20-year-old has already had his medicals.

However, Zinnbauer said Peprah hasn’t started training with the rest of the team, adding that he’s eager to see the exciting striker in action.

“Yes, I want to see him. He has had his medical check. I can’t say more because he is not at the training session,” Zinnbauer told the media.

Peprah is a highly-rated young striker from Ghana who was recently on the books of King Faisal in the Ghanaian Premier League.

Peprah will be offered a straight three-year deal by Pirates who were desperate to ease the pressure on their injured strikers.