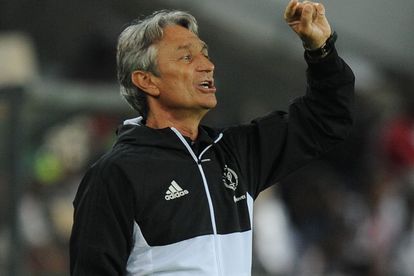 Muhsin Ertugral is optimistic his former club Kaizer Chiefs can build on what has been a season of challenges and go on and achieve great feats.

Muhsin Ertugral is optimistic his former club Kaizer Chiefs can build on what has been a season of challenges and go on and achieve great feats.

Ex-Orlando Pirates keeper Brighton Mhlongo has spilled the beans on the incident that led to team’s 6-1 loss to SuperSport United in 2016.

The Buccaneers were leading 1-0 at half-time through Tendai Ndoro’s 43rd minute strike but SuperSport United scored six unaswered goals in the second half.

And Mhlongo, who was in goals on the day, said there was an exchange of words between then coach Muhsin Ertugral and Pirates technical advisor Stanley Tshabalala during half-time.

According to Mhlongo, Tshabalala, famously known as Bra Stan or Screamer, would always come into the dressing rooms to advice the players after the coaches had given their half-time talks at Pirates.

However, he doesn’t think Ertugral was brought up to speed with how things worked at Pirates when he was first appointed as the head coach.

And on the day (1 November 2016), Ertugral didn’t take kindly to Tshabalala advising Gift Motupa on his first performance.

Mhlongo revealed that all hell broke loose as the fight between Tshabalala and Ertugral got heated to a point where Pirates players had to step in and intervene.

But during that commotion, the players themselves ended up fighting amongst themselves, and for Mhlongo, that incident led to the hammering of Pirates by SuperSport United.

“Honestly speaking, we were used to having our technical advisor, advising us with things like half-time talks and what not.

“Mr Tshabalala would advice, obviously, after the coach had talked. And him advising, it wouldn’t per se be called interfering or coaching,” he said.

“He would just advice. So, only to find out that at the time, the coach was Muhsin. Muhsin was a crazy character.

“Bra Stan tried to advice Gift (Motupa) about something here and there but Muhsin took it otherwise. He didn’t know. He wasn’t brought up to speed with the dynamics within the management and structures of the team.”

“And the players here, we are also haywire – we are saying this, and we want to calm the situation and this one is fighting that one…

“So, we could see it was some evil work,” added Mhlongo.

After the said match, Ertugral confirmed his resignation in his live TV post-match interview before making it official with a 3:00 AM email he sent to the Pirates management.

EISH WENA: If you laugh, you lose challenge [viral video]

Chicken and seafood paella: A hearty feast for the whole family