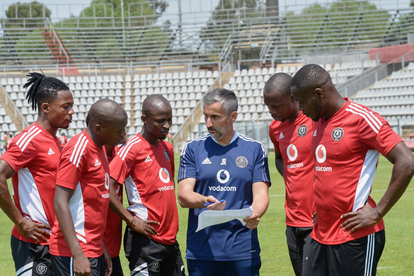 Bienvenu Eva Nga has been linked with an exit at Orlando Pirates just five months after joining the club.

The Cameroonian striker has made just six starts for the Buccaneers since joining the club at the beginning of the season.

Eva Nga has scored just once for the club and it seems unlikely that he’ll add to that number anytime soon!

According to reports, the striker who’s valued at a whopping R8 million looks set to leave the club in January!

“Chippa United are said to be negotiating with Orlando Pirates for the services of striker Bienvenu Eva Nga in the January transfer in order to bolster their squad.” a Citizen report read.

“There is a huge possibility that he is going back to Chippa, they are really serious.”

And ‘Romeo’ has since showered Amakhosi great ’16V’ with praise of the highest order.

Kaizer Chiefs legend was as big as Nelson Mandela – Erasmus

“For me, it’s always about appreciating the legends and I’ve good contact with a lot of players that’ve retired that I look to as legends.” Orlando Pirates star Kermit Erasmus said as quoted by IdiskiTimes.

“Lucky Lekgwathi is one of them that I’m speaking to constantly.

“For me, it’s always about showing respect to the legends that have paved the way for us, just like we did with Doctor Khumalo the other night.

“He is an icon, he is an icon. With what he’s done in his career. I don’t think he should work a day in his life anymore because in the early 90s he was as big as Nelson Mandela.

“That’s crazy, coming from the same environments we come from.”