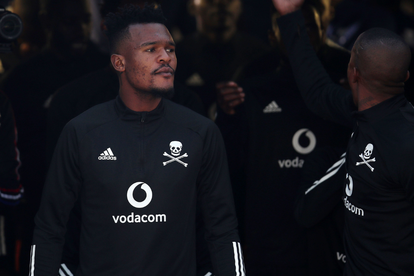 Outgoing Orlando Pirates midfielder Nkanyiso Zungu has opened up on his heartbreaking spell at the Buccaneers.

Zungu joined the club with much expectation in 2020. Things however didn’t go according to plan for the midfield maestro.

Zungu made just TWO appearances for the Buccaneers during the previous season.

He has since secured a loan move away from Orlando Pirates and will spend the 2022/23 campaign at top flight newcomers Richards Bay FC.

“Sometimes things happen, you get a lot of frustration and end up having depression.” the Orlando Pirates star said as quoted by SoccerLaduma.

“Depression makes you do things and I don’t want to talk about it, for now, it is personal but now I’m okay and want to play football.

“Besides not playing football, there were a lot of things that were happening in my life personally which caused the depression but I don’t want to talk about it.

“What I’ve learned at Orlando Pirates, as a player you have to work hard, be disciplined and always understand your role.

“Always be professional, respect yourself and others around you. You’re always playing for the badge, not for yourself.”

In other transfer news, A former Orlando Pirates coach has landed a top coaching job in Europe.

Josef Zinnbauer, the only coach to have won a trophy at the Buccaneers in over five years, has joined a European giant.

Zinnbauer was sacked after just one match in the 2021/22 campaign by Orlando Pirates.