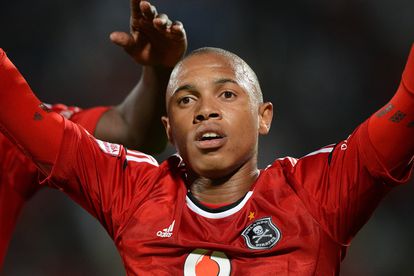 Orlando Pirates are closely monitoring the situation of a star Mamelodi Sundowns player according to reports.

Andile Jali’s contract comes to an end at the end of the current season meaning he’s free to sign a pre-contract elsewhere in January.

Given his age, combined with the plethora of talent at the Brazilians in the middle of the park, Jali may just be tempted to close his career out elsewhere!

He started just eight games this season for the Brazilians and this may be a major cause for concern for last season’s PSL midfielder of the season!

The midfielder is valued at almost R17 million by TransferMarkt but could leave the club for FREE.

According to local publication Kick-Off, Sundowns are keen to extend Andile Jali’s contract.

However given the fact that game-time won’t be guaranteed at Chloorkop, Jali may just be tempted to move on in what will likely be his final major contract in the PSL!

“KickOff understands that both Orlando Pirates and Kaizer Chiefs are keeping a close eye on the player’s contract situation.” the publication reported.

Despite being 38-years-old and unemployed since last year, Shabba has denied retirement rumours.

Siphiwe Tshabalala also claimed he recently passed up on a playing opportunity from abroad as he prefers to find a local club.

While playing is of importance, Shabba knows very well that the next side he joins will benefit tremendously off the field of play as well given his vast experience.

“I am not retired yet, I am still Siphiwe Tshabalala, active soccer player.” the Kaizer Chiefs legend said as quoted by Citizen.

“On Monday someone sent me a text about an opportunity to play abroad but I did not entertain it. I want to focus more at home and there is a lot I need to achieve at home.

“Not only on the football side. Also in development as well, and in the role I play on the education side.

“I still have the desire to play at the highest level. If it doesn’t happen, ok.

“I’ll wake up and say ok, that’s it. Thank you to football, I will have no regrets. I have had a lot of highs. I’m grateful and my heart is full.”