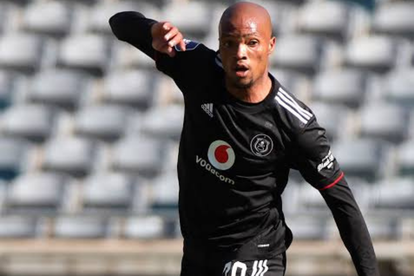 Remember the former Orlando Pirates striker James Mothibi? He has revealed he knows Mosele rather well.

It’s become clear for all to see, Mosele has performed well enough to become one of the Buccaneers’ Player of the Year candidates come the end of the season.

In only his first season at Orlando Pirates, aged 22, Mosele has played 22 games that include two goals and three assists.

According to Mothibi, there’s something especially unique about Mosele’s football.

“I have known Mosele since he was young and what I know about him is that he’s got his own way of playing,” Mothibi said via Soccer Laduma.

“He can change gears during the game and has got a way of unlocking defences and he’s got the ability to score goals.

“Oupa Manyisa has got similar qualities and so is Andile Jali but I wouldn’t want to say Mosele is the next Andile Jali or Oupa Manyisa. Mosele is Mosele and I call him Pelele. Each and every player out there is creating his own legacy.“

GOD MUST PROTECT HIM

Mothibi added to reveal that he had a word with Mosele when the Orlando Pirates star seemingly had a lapse of discipline earlier this season.

Mothibi believes that Mosele simply needs divine intervention from falling off the rails in a place like Gauteng.

“Mosele is going higher and higher and you need that in modern football and the boy is improving.

“I remember there was an issue with him failing to honour a national team call up and I sent him a message on WhatsApp to say I wasn’t sure of what was going on with him but what I have always known about him is that he is a respectful boy.

“He comes from Khuma where my second home is. I’m happy for him that he managed to come back strongly, and I just wish that God can protect him from all the evil in Gauteng and from all the evil in this world so that he can take his career further to be able to help his family and be a role model to kids,” Mothibi concluded.