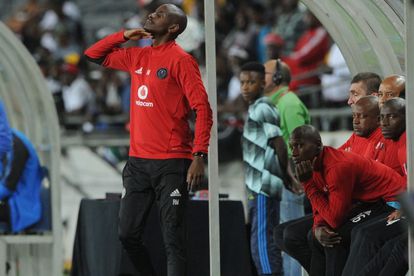 Former Orlando Pirates coach Rhulani Mokwena did not take long to prove the Sea Robbers wrong about releasing him.

Did he fail? The 35-year-old does not believe so.

It all seemed like a match made in heaven. One of the most dynamic and progressive coaches of our time, a Pirates ‘son’ was given an ‘interim coach’ role at Bucs.

Speaking to the media about his spell at his uncles’ club, Mokwena believes he did not fail at Pirates. What the public did not capture was the context.

“One of the most important characteristics I have had to develop is intelligence,” Mokwena told the Sundowns magazine, as quoted by Soccer Laduma.

“Having emotional intelligence has allowed me to see b myself which is very important in football. Self-absorption is a detriment because it makes one prone to personalizing everything and everything sounds like an attack.

“Once you can focus on things outside of yourself, you understand that everything is working for your own good. People often about how I failed at Orlando Pirates without understanding the context.

“Three years later, I am in a similar position of having to assume leadership in a very difficult position. Being in this position has helped because I have been here before. I am like David because I have all fought the bear.

“If I was still self-absorbed, I wouldn’t be able to realize that, now opportunity to use my experiences, strength, and knowledge that God has given.

“My personal experiences of pain and suffering have prepared me to face challenges today,” Mokwena concluded.

Meanwhile, Mokwena’s Sundowns will face Pirates when the DStv Premiership resumes on 31 December.