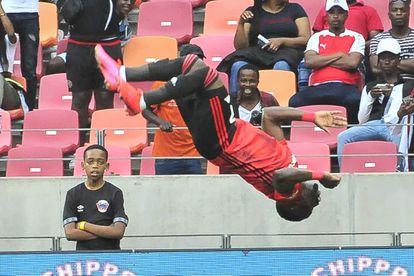 The inability to close out games was the theme for Orlando Pirates not so long ago. Since they have improved on that aspect of their game, victories have come pouring in.

The Buccaneers jumped up to second in the league standings on Saturday, gaining some distance from where they were prior to the end of the year.

During the first half of the season, Pirates were plagued by costly defensive lapses, which denied them three points on a few occasions, most notably against Baroka – where they squandered a a two-goal lead in the last ten minutes of the game to settle for a draw – as well as their recent fixture against Bloemfontein Celtic, who also scored late to force a stalemate.

Since that game against Phunya Sele Sele, the Buccaneers have won five straight games – the latest being a 2-1 victory over Chippa United on Saturday, where Vincent Pule was named man of the match.

Upon receiving his award, the Bafana midfielder said managing early leads was paying off for Pirates.

“We knew that it was going to be difficult, an away game is always difficult,” Pule told SuperSport TV after the game.

“But we had to pass the ball around. Fortunately, we got two goals early and I think it’s working for us to score early.”

All five of their most recent victories came under new coach, Josef Zinnbauer, whose only blemish since taking over seven fixtures ago was in the 1-1 draw against Celtic.

Pule lauded the German on how he has encouraged the team to express themselves.

“But we have to defend well and stay compact. And I think it’s working for us.”

In their five-match winning streak, Pirates have notched up 11 goals, with all but one coming in the first half.

The main contributor has been Malawian striker Gabadinho Mhango, who has six goals in the last five matches, and Pule believes it’s now up to the team to maintain their winning momentum.

“We know we have to work hard, we have to continue with what we have now. We have to keep going, it’s good now, we won six [five] games in a row. It’s working for us, we work hard and we keep on going.”

On his personal performance, Pule said he was happy to contribute to the team.

Pirates now take a break from league action ahead of their Nedbank Cup first-round clash against Wits.