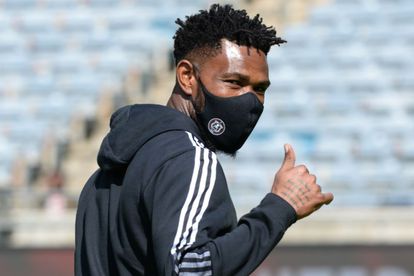 Thulani Hlatshwayo at least fulfilled his dream after growing up as a Bucs fan. Photo: Orlando Pirates

Thulani Hlatshwayo at least fulfilled his dream after growing up as a Bucs fan. Photo: Orlando Pirates

Orlando Pirates’ former defender Thulani Hlatshwayo has suggested he was treated unfairly at the Sea Robbers.

DID ORLANDO PIRATES DO HLATSHWAYO BAD?

Unfortunately, the dream failed to deliver a happy ending. The Soweto-born star made only 10 appearances last season before he was released.

Asked to explain where it all went wrong, the 32-year-old says it was a mistake in the Soweto derby and was sadly never given a second chance.

“I played the ball back to Siyabonga [Mpontshane], behind me I didn’t see Khama [Billiat],” Tyson told Soccer Laduma’s Tumi Gabonamong in the latest edition.

“In the change room I  told everyone I take full responsibility for the mistake I made.

“I was fully aware my mistake brought Chiefs back into the game.

“I made a mistake and was never given an opportunity to fix it, but listen, lesson learnt,” he added.

SEVEN BUCS PLAYERS WITH A NEW CHANCE TO IMPRESS

A brand new coach, especially one from as far as Europe, will seek information about his players but will also use his own eyes and mind to select talent on the training pitch.

This is therefore why several Orlando Pirates players will run and kick harder as well as shout louder to force themselves into the team after missing game time under Mandla Ncikazi and Fadlu Davids last season. Read the full story here.

‘Tristan should be ashamed’: Tweeps on #TheKardashians