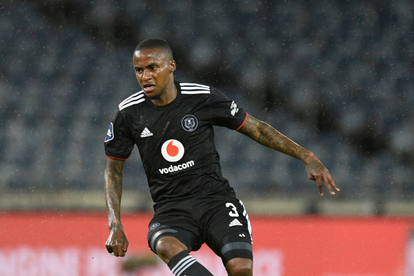 When a player like Orlando Pirates ace Thembinkosi Lorch identifies you as a great player, you just can’t ask for better recognition from anywhere else.

The Bucs star told his club’s website that Serero, who now plays his football for Al Jazira in the United Arab Emirates, is his favourite player.

The information was revealed on Pirates website where Lorch, known as “Nyoso” is profiled. After confirming that that Bloemfontein-born player was spotted by Screamer Tshabala while playing for Maluti FET College, the club added to say that Lorch is a Serero fan.

“This Thulani Serero fan says it is a privilege and an honour to play for Orlando Pirates and wants to win trophies with the team,” Pirates said.

One thing about the 28-year-old Pirates star, he will always find time between training sessions to put on some expensive clothes for the camera.

The Bloemfontein-born player, known as “Nyoso” first blessed followers on Twitter with an all-white outfit.

The look includes what looks like a Gucci hat, a white Moschino t-shirt that costs over R 2000, white jeans, and equally expensive-looking white sneakers. Read the full story here.