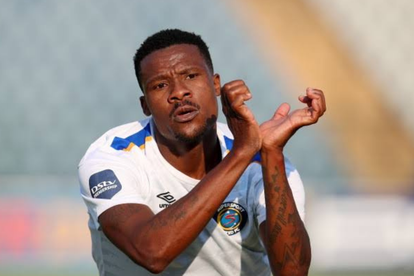 Orlando Pirates surprise supporters every season with player exits, and Thamsanqa Gabuza’s surely stands out by a mile.

Following a bright season of seven goals in 24 Premier Soccer League games this season, the larger-than-life Gabuza has confirmed it as his best ever.

Speaking to Robert Marawa on the Marawa Sports Worldwide show this week, Gabuza took a moment to reveal the special way in which the move away from Bucs occurred.

“You know Rob, when you’re coming from a big team like Orlando Pirates to SuperSport… I was not sure Rob, I was not very sure,” the Newcastle-born player said.

“Then the chairman of SuperSport, Stan Matthews, he came to [the] Orlando Pirates to fetch me. Imagine? Personally, personally Rob. The whole CEO.

“I don’t know what happened. There was just something. Some kind of transfer. I don’t know.”

Check out the full video snippet below as shared by Marawa via Twitter.

What a point. Orlando Pirates’ former winger Joseph Makhanya has explained how the club has continuously failed in player recruitment.

As a frustrated Orlando Pirates fan, you might sing hallelujah after this. The club’s former star Joseph Makhanya has honestly hit the nail on the head here about player ins and outs at the Orlando Stadium.

“You see Pirates have a tendency of getting players from smaller teams and they are expected to excel,” Makhanya said. Read the full story here.