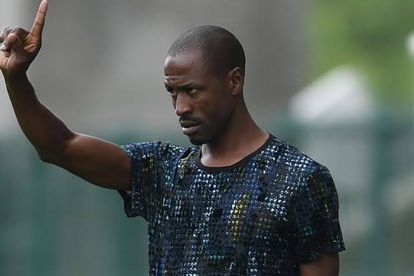 Every Orlando Pirates fan surely remembers Benson Mhlongo. He quietly went about his serious business in midfield or defence – with his shorts always tucked in. What a workhorse he was.

Mhlongo played nearly 200 games in the Premier League Soccer and the continent for the likes of Pirates, Wits, SuperSport United, Mamelodi Sundowns, and Platinum Stars.

He later went on to coach Pirates’ reserve team and later TS Sporting in the GladAfrica Championship.

During a philosophically-charged and intelligent interview in the latest issue of Soccer Laduma, Mhlongo took a moment to reveal how he wants to be remembered.

“Most of the boys I coached are in the GladAfrica Championship and are doing well,” Mhlongo said after sharing an anecdote on how he inspired Sekhukhune United’s Yusuf Maart.

“Every day, I am not joking.

“I think everyone I worked under or worked with can explain it better. Because when I die, I don’t need anyone to talk at my funeral.

“I have to put that in my Will. I don’t want anyone to talk.“

Asked why so, the 41-year-old from Johannesburg’s Alexandra, who was known to drive to Rustenburg every day to train with Platinum Stars, responded to say:

“What is it that you want to say at my funeral you can’t say when I’m still alive?” Mhh great question.”

Meanwhile, the man who is known as Mayanga concluded to say he is still waiting for the right offer to resume his coaching career.

Here’s another gem we’ve found on the internet when Mhlongo had a chat with Robert Marawa on live television in 2020.

BEST XI OF PIRATES PLAYERS WHO LEFT SINCE 2010

Pirates supporters have learned to cross their fingers come the end of every season. The club consistently parts ways with some rather quality players.

Look everywhere around the world, clubs do everything in their power to keep generational talent in their books beyond their playing years.

Locally in the PSL, just look at Doctor Khumalo, Donald Khuse, and Itumeleng Khune at Kaizer Chiefs, as well as Surprise Moriri and Themba Zwane at Mamelodi Sundowns.

But this is not exactly the case at Pirates.

Though Jali, and someone like Kermit Erasmus, left for once-in-a-lifetime opportunities to play in Europe, both players bizarrely returned to Mzansi to join other clubs rather than Pirates.

Surely there were opportunities to re-sign them but only the Pirates management knows why Jali and Erasmus went to Cape Town City and Mamelodi Sundowns respectively.

We saw the same movie with the likes of Mbulelo Mabizela and Benedict Vilakazi. Read the full story here.