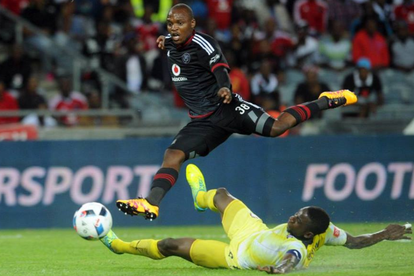 During a chat about the good old funny days, Mabokgwane was asked to share a funny story from his past.

It was during one Bafana Bafana camp with the players having dinner. Mabokgwane says the Bolobedu-born Motupa was known for always eating a lot more than any player on sight.

“Gift Motupa used to be such an eater. He would eat,” Mabokgwane said in the latest edition of Soccer Laduma.

“His plate was always massive and coach Shakes (Mashaba) was always on his case when we were having dinner in Bafana Bafana camps.

“When Gift passed next to coach Shakes, you would hear coach Shakes saying, ‘”People must play the way they eat, ha, ha, ha.”‘

“The following day, Gift was so stressed, thinking if he does not score, then coach Shakes would be on his case because he said people must play the same way they eat.

“Gift would be under so much pressure to score because of what coach said. Talk about a mountain to climb, man.

“Well, Bra Shakes should have known that strikers depend on service to do well on the field of play, and all Gift was doing was to show him what he could do given a chance to service himself,” the former Orlando Pirates number one added.

Staying with Orlando Pirates, a former midfielder has revealed how his life took a turn for the worst the moment he was released by the Sea Robbers.

Not many Pirates fans will remember Bongani Cashibe. Why so? Well, his time at the Soweto giants was cut short due to ill-discipline off the field.

Reflecting on his career during a chat with TK on TK Solutions on YouTube, Cashibe explained how his career hit the barrel when Pirates released him.

“Go home! That’s when the problems started. I was never in the newspaper for doing bad things.“ Read the full story here.

How Legal Ombud fights for your rights

How GBV changed my life