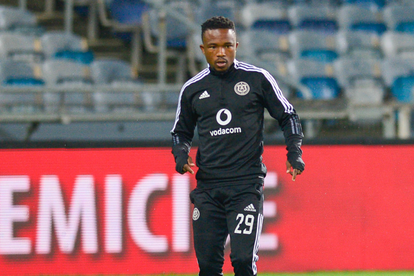 Fans of Orlando Pirates star Paseka Mako have been asking questions. The left-back has lost his regular place since the arrival of coach Jose Riveiro.

As many of you might clearly remember, the 28-year-old from Zebediela suffered a devastating head injury late last season after colliding with Richard Ofori’s knee.

The player known as ‘Computer’ has since fully recovered from the blow and had a complete pre-season under his new Spanish coach.

MAKO YET TO START FOR ORLANDO PIRATES

Despite the full rehabilitation, Mako has only made one substitute appearance in the 1-0 win over Richards Bay a fortnight ago.

While Mako is a specialist wing-back, the Namibian winger Deon Hotto has been converted to a rather effective wing-back.

“Mako is a valuable player for us, amazing as a person; he is training [every day] at a 100 percent level; he played against Royal AM,” Riveiro said via Soccer Laduma.

“The way that he[Mako] behaves every morning, pushing and motivating everyone and fighting for a position and always smiling, always in a good mood, that’s something that I really appreciate as a coach when a player is not starting the game regularly like in his case at the moment.

“But there will be opportunities for everyone, Mako is fighting for it like all of the players in the squad, and we are very happy to have Mako in our group,” the Spaniard concluded.

Meanwhile, the Sea Robbers are preparing to host Marumo Gallants at the Orlando Stadium on Wednesday 24 August at 19:30.

READ MORE: Chiefs – Watch Solomons’ quality, the best is yet to come – Video

Does Mako has a promising chance to compete with Hotto this season? Let us know in the comments section below.