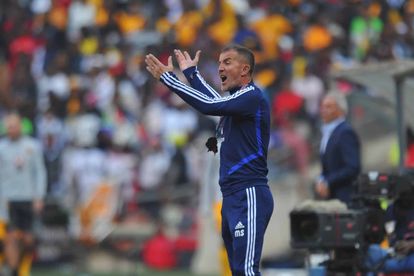 Orlando Pirates coach Milutin Sredojevic has shouldered the blame for an embarrassing 3-0 defeat at the hands of Supersport United at Mbombela Stadium on Wednesday night.

The Buccaneers were playing their second league game of the new season at a venue they have had a terrible record in in recent years.

There was to be no change to their fortunes in Nelspruit, with Bafana striker Bradley Grobler finding the net on either side of the break, before setting up second-half sub Ghampani Lungu for the third.

Pirates’ display, on the other hand, was characterised by costly defensive errors, with failure to clear the ball resulting in at least two of the three goals on the night.

Speaking to Supersport after the match, “Micho” offered an apology to the fans.

“A tough competitive match, we owe our supporters an apology after losing in this fashion,” he said in his post-match interview.

“Maybe the crucial moment of the game happened [when] we conceded the first goal, we were risking there [at the back] and that put us in a position to go into the risk.”

Recharge needed at the Buccaneers camp

The defeat is a second consecutive one for the Buccaneers, who fell to Zambian outfit Green Eagles in the Caf Champions League over the weekend.

Their next outing is a cup game at home to Highlands Park on Saturday, with an MTN 8 semifinal spot at stake.

The Serb said it’s important that Pirates bounce back from Wednesday’s disappointment in order to be up for a place in the final four of the competition.

“In any way, I’d like to take responsibility for this loss to myself. We need this 72 hours [before] our match against Highlands Park to regroup, go back to the drawing board and analyse.

“We need to inject new energy, have a shock therapy in a way. The second match of the season, but this is happening. Pirates had chances.”

Orlando Pirates’ last run in the MTN 8 ended on the first hurdle, as they lost to Supersport United on penalties in the quarterfinals.

They return to the competition still in search for elusive silverware, as they have not added to their trophy cabinet since the 2014 Nedbank Cup.