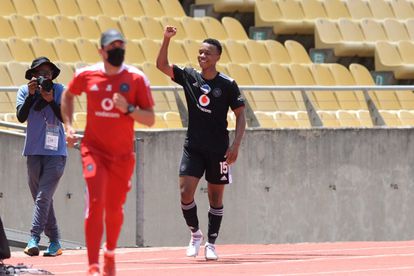 Radiopane wasn’t used much in the first team this season but Ncikazi believes next season will be a completely different story for the 19-year-old.

Radiopane was in scintillating form for the Buccaneers reserves this season. He bagged the DDC Top Goal Scorer award with 24 goals!

The Orlando Pirates starlet was also named DDC Player of The Season.

The likes of Kwame Peprah and Zakhele Lepasa were preferred ahead of Radiopane despite his fine form.

The Buccaneers endured a torrid campaign last season. They finishing outside of the top five while failing to lift any silverware.

Ncikazi has since promised a fresh chance to Radiopane come next season.

“Let’s give him an opportunity in the big league. Then we can start writing the right exam.

“But I am very optimistic that we have a good player in him. We have to give him an opportunity soon.”

“Next season I am sure he will get a chance for Orlando Pirates. He is going to be one of those great strikers based on the quality I have seen in him.”

In other transfer news the Buccaneers confirmed two new signings.

This comes just days after the club announced the axing of Thulani Hlatshwayo.

Orlando Pirates are not done in the Transfer Market. The club are closing in three more signings.

Included in the reported list of arrivals are Miguel Timm, Azola Matrose and Eva Nga.