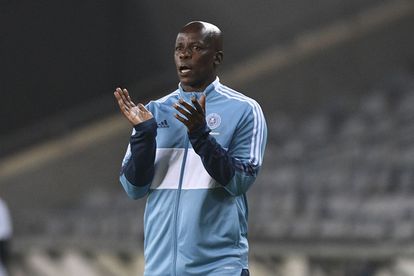 Orlando Pirates coach Mandla Ncikazi has hit out at Mamelodi Sundowns coach Rhulani Mokwena for hitting back at him!

Yes, you read the above correctly. The war of words between the two heavyweight coaches continued when Mandla Ncikazi responded to Mokwena’s latest comments.

Ncikazi’s comments never sat well with Mokwena who questioned his leadership skills and the Buccaneers coach has since offered his eagerly awaited response!

He has something against me – Orlando Pirates coach!

“I’d like to apologize to the supporters of Orlando Pirates for my comments about Woolworths and Pick n Pay.” – Mandla Ncikazi told Thabiso Mosia on SAFM.

“I didn’t mean to offend anyone. There’s already comments from other teams and because of that I won’t say anything further because I think that person (Mamelodi Sundowns’ Rhulani Mokwena) has an issue with me and Pirates.

“I don’t even want to clarify myself cos I don’t want to cause anymore controversy. Especially after the person who commented said those things. He has never had anything nice to say about me or Orlando Pirates anyway.”

“For me, the biggest thing is what does it say to his own players? And I know the Orlando Pirates players because I worked with them, and I don’t want to say much about it.

“I don’t want to go into that space. It’s a difficult comment to make and maybe he’s got his own logic why he made that comment and maybe it’s for the media to interrogate that statement.” Rhulani Mokwena continued.

“You guys must interrogate that statement – ask him what does he mean by that! Because, to be honest, if you’re a Orlando Pirates player and you hear something like that I’m not sure how you’ll feel.”

What did the Orlando Pirates coach originally say?

What exactly did Orlando Pirates coach Mandla Ncikazi say for Mamelodi Sundowns’ Rhulani Mokwena to react in that manner? Well you can take a look below.

“Some teams are playing with development players, getting young players. Most developments were closed, SAFA was closed but Mamelodi Sundowns buys at Woolworths, and we buy at Pick n Pay and Spar.” Mandla Ncikazi said.

“If Spar and Pick n Pay are closed we can’t buy, I think it’s a scenario like that, they buy what’s ready, maybe that’s the difference, we (Orlando Pirates) just need to be competitive.”