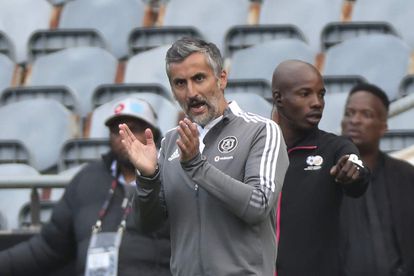 The 2022/23 DStv Premiership season will resume on Friday, 30 December following a lengthy break for the FIFA World Cup in Qatar. Photo: Gavin Barker/BackpagePix

The 2022/23 DStv Premiership season will resume on Friday, 30 December following a lengthy break for the FIFA World Cup in Qatar. Photo: Gavin Barker/BackpagePix

Orlando Pirates have made their second striker signing this week with coach Jose Riveiro recruiting a top young Cameroon attacker.

The Buccaneers shocked Mzansi on transfer deadline day when they announced Kermit Erasmus and Ndabayithethwa Ndlondlo as new recruits and now they have made TWO more signings in the same week.

Marou Souaibou is the latest player set to join Pirates, according to kick442.com.

He is set to feature for the Indomitable Lions in the FIFA World Cup in Qatar later this month.

Earlier this week, as reported by The South African website, Orlando Pirates signed a R7 MILLION striker who has over 50 PSL goals to his name.

The most recent signings may come as something of a surprise to supporters as the Buccaneers already boast arguably the most depth in the league in terms of attackers.

In addition, Bafana Bafana striker Evidence Makgopa is yet to be unleashed.