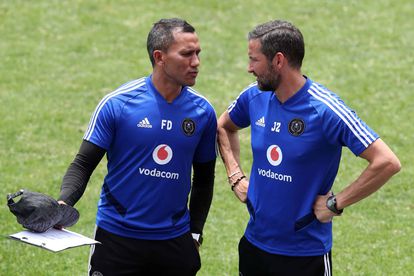 Orlando Pirates headed into the new season with much expectancy however the defending MTN8 Champions were dealt a major blow after being knocked out of the first cup of the season in the opening round.

Lekgwathi admitted that he knew things would end in disaster for Josef Zinnbauer from the minute he saw the German tactician’s starting lineup.

Orlando Pirates went down 2-0 against a Ruzaigh Gamildien inspired Swallows FC but their decision to start without a proper striker during a cup game left Lucky Lekgwathi baffled.

I knew it would be a disaster for Orlando Pirates – Lekgwathi

Orlando Pirates legend Lucky Legkwathi was left unimpressed with his side’s coaching decisions during their MTN8 loss and wasn’t shy to make it known.

“I didn’t expect Orlando Pirates to lose to Swallows, especially after they (Swallows) lost their key players. And at that time, you’re the defending champions and I’m sure they also wanted to match our record of winning the MTN8 cup back to back,” Lekgwathi said as quoted by Phakaaathi.

“Ok, he scored a lot of goals last season, but most of his goals were coming from Lorch. And now Lorch was not available and there was no way he was going to score. If Orlando Pirates were playing with a genuine striker, I think we could have done better.”

Orlando Pirates are next in action after the upcoming international break when they host the same opponents that knocked them out of the MTN8 however this time they meet Swallows FC in the league on 11 September 2021.