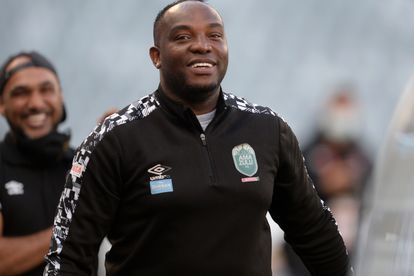 Benni McCarthy says the continued reports linking him with the coaching roles at both Kaizer Chiefs and Orlando Pirates are mere speculation. Photo: Ryan Wilkisky/Sports Inc

Benni McCarthy says the continued reports linking him with the coaching roles at both Kaizer Chiefs and Orlando Pirates are mere speculation. Photo: Ryan Wilkisky/Sports Inc

According to the Buccaneers legend, the time to appoint Benni McCarthy as their new head coach is now!

This comes following the club’s decision to part ways with Fadlu Davids.

Davids acted as an Orlando Pirates co-coach alongside Mandla Ncikazi during the recently concluded PSL campaign.

The Buccaneers ended the season in disappointing fashion after losing the CAF Confederations Cup final in penalties.

Orlando Pirates then suffered an underwhelming league end to the season. The Buccaneers finished off in sixth place on the log standings.

“He understands what it means to wear the black and white jersey of Orlando Pirates and he has done very well as a coach.

“He is one of best players we have produced. Benni was able to perform at the highest level of the game.

“For him to be given a chance to coach the team, I think he might come up with the right things.

“He might come up with right formulas. Benni can talk to the players and make them understand what it means to play for Orlando Pirates.

“For me, Benni is the right man. I can put my head on a block and say he is the right type of guy to take the team back to winning ways.”

Benni McCarthy was most recently in charge of AmaZulu FC.

Things however turned sour after inconsistent League results. AmaZulu then opted to fire McCarthy in March 2022.