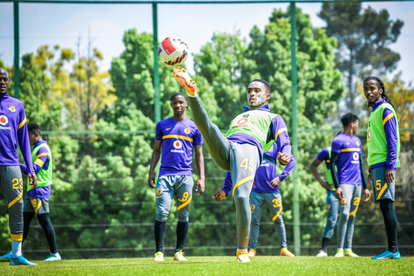 Orlando Pirates biggest transfer target yet has been revealed and he plays for their greatest rivals, Kaizer Chiefs.

Pirates have joined the race to sign Njabulo Blom from Chiefs, according to Phakaaati.

The Bucs join the likes of Mamelodi Sundowns, SuperSport United and AmaZulu as prospective clubs bidding for the talented Amakhosi midfielders signature.

Blom is red-hot property in the DStv Premiership – clearly.

Since his agent Rob Moore announced that Amakhosi management were not willing to increase his wages he has caught the interest of the biggest clubs in the PSL – Sundowns, Pirates and AmaZulu.

However, all hope is not lost and there is good news coming out of Naturena.

Blom has agreed to staying at Naturena, in principle at least, as previously reported by The South African. Furthermore, there are even more twists in the ongoing Blom contract saga, contrasting reports confirmed that he may indeed end up at SuperSport.

NO CONFIRMED DEAL YET FOR BLOM

The latest news is that their is no agreement in writing with any prospective club or Amakhosi management.

Therefore, nothing has been confirmed yet but what we do know is that the Bucs have joined the race to sign Blom and we know they have the financial means to meet the Amakhosi stars wage demands.

However, a decision will be made soon as we are now just one month away from the January transfer window.

It all comes down to Chiefs management officially making Blom an increased offer on his wages which they are now under huge pressure to meet given the attention he has caught from other clubs. The reality is, if they do not, they are likely to lose Blom and their is a possibility he could even end up at the Bucs!

Amakhosi management must fight for Blom, at all costs – literally.

Imagine seeing Blom run out for the Bucs alongside the likes of Monnapule Saleng and Kermit Erasmus against Amakhosi in the Soweto derby? Sounds like a dream if you’re a Buccaneer and a nightmare if you’re an Amakhosi fan. One that can be avoided right now if Zwane and Chiefs management can make an offer worthy of one of arguably their best players.