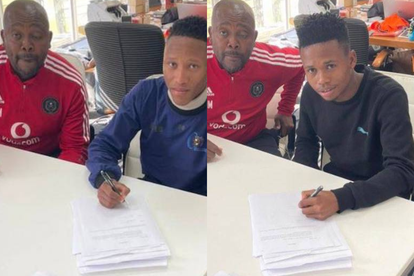 Wow, it sounds like a steal. Orlando Pirates have signed two players after they had trained with Kaizer Chiefs.

Amakhosi‘s Soweto rivals have moved with a faster pace to sign a pair of rough diamonds from the second division.

According to the riveting report, the two players from the North West’s Orbit College initially trained with Kaizer Chiefs, before Bucs did a different move.

“Orlando Pirates have beaten arch-rivals Kaizer Chiefs to some of the most promising football talents in the ABC Motsepe League in the country currently,” SABC Sport reported.

“Yes, it is true, the boys trained with the Chiefs reserve team for three days last week and they were impressed with them, but unfortunately they were slow to react and Pirates came back to finalize the deal,” Orbit’s coach Pogiso Makhoye told SABC.

“You will recall that Pirates spotted the boys first during the Pirates Cup, which was held in Johannesburg, but according to them, they were waiting for us to complete the ABC Motsepe play-offs.

“During that period, Chiefs also came into the picture and that’s how the boys ended up in Naturena for assessment. But we are now happy to have concluded with Pirates, who have also compensated us appropriately for developing the boys.”

ABOUT THE TWO PLAYERS

SABC’s Velile Mnyandu added a few exciting details about the pair, with one player described as the next local superstar.

“Khuto, who hails from Kanana in Rustenburg and turns 20 in December, netted 15 goals and provided 18 assists last season and is said to be the player to look out for with Makhoye proudly tipping him as the next Jabu Mahlangu or Steve Lekoelea.

“Bule, who comes from Blomhof, is a right-footed number-10 and scored five goals and provided four assists last season. SABC Sport understands that the two players are expected to be paraded by The Buccaneers in the Diski Shield tournament set to take place next week,” the report concluded.