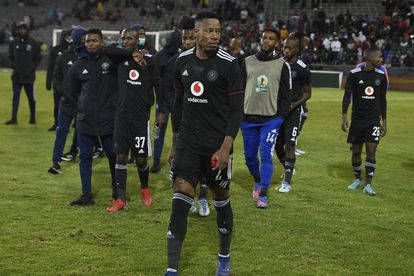 Orlando Pirates fixtures: Bucs may yet pay the price for their continental successes as they now face a hectic conclusion to their league campaign.

The PSL have had to reschedule Pirates’ remaining matches which leaves them with the prospect of playing three games in eight days to end the term.

Orlando Pirates travel to Nigeria this week ahead of their Caf Confederation Cup final against Morrocan side Renaissance Sportive de Berkane.

Scheduled to take place on Friday 20 May the final will take place at the Godswill Akpabio International Stadium in Uyo.

Pirates secured their place in the final with a 2-1 aggregate win over Al Ahly of Libya and have now reached this stage of the competition twice.

In 2015, Orlando Pirates lost a two-legged final to Étoile du Sahel of Tunisia.

RS Berkane are previous winners of the tournament, having lifted the trophy in 2020 after losing the 2019 final.

The cost of success

As a result of previous postponements en route to the final, Orlando Pirates still have three league games to play.

This means that 12 PSL teams will complete their seasons on Saturday 21 May as originally planned while Pirates and their opponents will have to wait.

The results of these matches could profoundly alter the outcome of the season with Pirates still chasing continental qualification for next season.

Orlando are scheduled to play their remaining fixtures on 25 May against Maritzburg United at Orlando Stadium, they then travel to Chatsworth Stadium to face Royal AM on 29 May, before finishing the season away on 1 June against SuperSport United at the Lucas Masterpieces Moripe Stadium.

There is likely to be something on the line for two of the three sides Pirates face as well.

Royal AM currently sit three points behind second-placed Cape Town City and could find themselves needing a win to claim a Champions League spot.

Maritzburg United have avoided relegation and cannot reach the top eight but will no doubt enjoy a pressure-free trip to Orlando Stadium.

SuperSport United could be chasing a result to keep themselves in next season’s MTN 8.

25 May vs Maritzburg United at Orlando Stadium

29 May vs Royal AM at Chatsworth Stadium