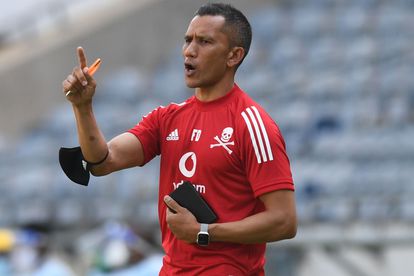 Davids, who has held head coach positions at a couple of PSL clubs, and was co-coach of the Orlando Pirates’ first team after Zinnbauer was dismissed from his post at Mayfair, is now back in work thanks to the German’s referral.

Josef Zinnbauer recruits Fadlu Davids to his cause

The club are apparently hopeful of adding a Russian-speaking assistant to the team to ensure that communication is optimised.

Lokomotiv Moskow sporting director Thomas Zorn has revealed that Zinnbauer specifically requested that the club recruit Davids for the role of assistant coach.

“Any head coach needs assistants to realize his vision of football, so at the request of Josef, we invited Fadlu, who took up the position of assistant head coach. Josef and Davids worked together in South Africa for a year and a half. They have a common view of football, the requirements for training and gaming processes,” Zorn said.

“Also, in addition to Fadlu, at the moment we are considering the option of inviting another Russian-speaking specialist as Josef’s assistants to expand competencies and strengthen the coaching staff.”

Davids has a reputation for helping to develop young players and has been in coaching since he hung up his boots in 2012 working consistently in the decade between then and now.

Lokomotiv has previously established links with South Africa having had former Swallows man Jacob Lekgetho and Sundowns stalwart Bennett Mnguni on their books in the past.

The backroom staff unit is a multi-national one although a number of its members have strong connections to Russia.

Davids will not be in the dugout when Lokomotiv take on FC Khimki in the Russian Cup on Wednesday but he could make the Russian Premier League match against Ural Yekaterinburg at the weekend.