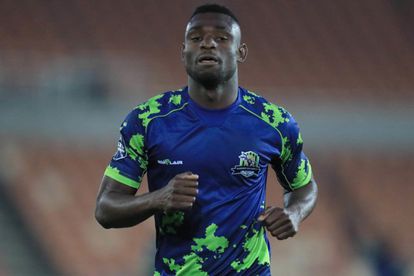 Orlando Pirates are said to be facing stiff competition for a potential new striker target ahead of next season, according to reports.

Pirates are believed to be on the verge of signing Chippa United striker Bienvenu Eva Nga, but are not prepared to stop there it seems.

Judging from most of the transfer speculation surrounding Pirates, it is becoming less of secret that their forward line is one of the positions they want to bolster ahead of the next season. Having previously been linked with a move for Royal AM’s Victor Letsoalo, but nothing seemed to materialise from that interest. Eva Nga is now set to be the striker they have set their sights on, but if the latest proves to be true, he could form part of a new strike partnership at the buccaneers should the club’s transfer plans come to fruition.

That is because Soccer-Laduma claim that Pirates have also set their sights on Marumo Gallants striker Sede Junior Dion. It is claimed that they have been monitoring the marksman since his time plying his trade in neighbouring Botswana for Jwanang Galaxy. Pirates had recently played against the side in continental football, so would’ve had their own first hand look at the player and his attributes. It is believed that, should they pursue the player, however, they will face stiff competition from fellow DStv Premiership side.

“The number of clubs that are showing interest in Sede Junior Dion is growing as the player is likely to move from Marumo Gallants at the end of the season. Stellenbosch FC and AmaZulu have become the latest clubs to show interest in the player, although no formal offers have been made by any of the clubs yet,”  Said the source to the publication.

Dion has been a menace in the Nedbank Cup for defending champions Marumo Gallants, having scored three goals in four games in the tournament heading into this weekend’s final against Mamelodi Sundowns.