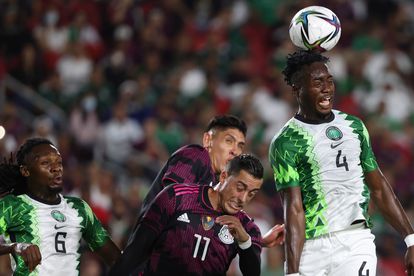 Nigeria’s Olisa Ndah feels he has moved to Soweto giants Orlando Pirates at the right time of his career and will be a success at the club. @GettyImages/Harry How

Nigeria’s Olisa Ndah feels he has moved to Soweto giants Orlando Pirates at the right time of his career and will be a success at the club. @GettyImages/Harry How

Both Nigeria defender Ndah and Ghana forward Peprah, who were signed by the Buccaneers prior to last week’s transfer window deadline, have been adjusting to life at the Soweto giants.

According to Kickoff, an Orlando Pirates official confirmed they were working to get the work permits sorted out so the duo would be available for selection.

“The papers should be ready,” the official said.

“We are confident that both players will be available for selection against Swallows.

“However, their participation will depend on the selections of the technical team.

“They have been here for several weeks now and are adapting well to their new surroundings at Pirates.”

Peprah, who signed a three-year-deal with Orlando Pirates from King Faisal FC, said he can’t wait to play for the club.

“It was my dream to play for a big club like Orlando Pirates one day, so it was not difficult for me to choose the club,” Peprah told Ghanaian publication Footballghana.

“It was my dream and thanks to God being so good that it has become a reality.

“Everything is cool as compared to Ghana. I have followed the South African league a bit and I think the difference between our league and the PSL is not all that wide so I hope things will go well for me.”