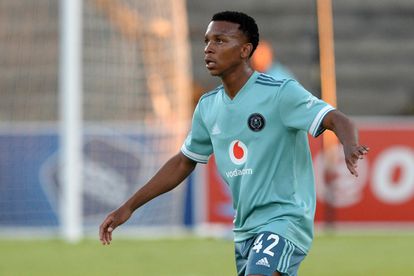 Young striker Boitumelo Radiopane continues to impress in the Under 23 Multichoice Diski Challenge for Orlando Pirates, suggesting he might be ready to step up.

Orlando Pirates have played decent football for much of the season but have little to show for their displays because they have struggled in front of goal.

A revolving cast of strikers, due to issues with form and fitness, means that few in the first team can claim to be anything near settled and none of the chosen frontmen have caught fire this term.

Fitness has been a major problem for both Gabadinho Mhango and Tshegofatso Mabasa while Zakele Lepasa has been a long-term absentee.

Terrence Dzvukamanja has been prefered in a wide role for Orlando Pirates this season as has Deon Hotto, who was arguably the Sea Robbers best forward of 2021.

There has, of late, been a lot of support for Ghanaian striker Kwame Peprah after a string of encouraging performances for Orlando Pirates in the league.

Peprah has shown the energy that one would frankly expect from a 21-year-old striker but he also has not been lethal in front of goal.

Orlando Pirates have occasionally fielded a conventional strike pairing which could open the door for Radiopane to play a much bigger role in the first team.

At this time, the 19-year-old would benefit from being paired with an experienced striker like Mhango, allowing him to learn and giving him the freedom to make an impact.

Orlando Pirates tend, however, to prefer the use of a 4-3-3 and it seems unlikely that Fadlu Davids and Mandla Ncikazi would entrust the central striking role to Radiopane.

Who are Kaizer Chiefs’ most valuable players right now?

Radiopane made four brief substitute appearances for Pirates in the league earlier this season without making much of a splash but has since gone on to enjoy a fruitful season in the MDC.

The question remains, is Radiopane ready to do it on the big stage?