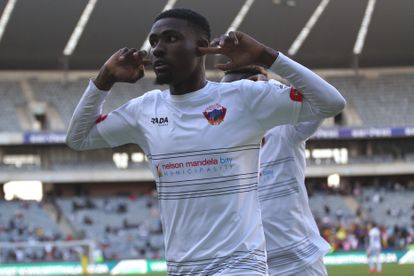 Former Orlando Pirates men came back to haunt the Soweto giants on Sunday as Chippa United stole three points in a visit to Orlando Stadium.

Chippa coach Daine Klate is a former Sea Robbers hero and he would credit the efforts of Justice Chabalala, who was recently released by the club with setting up the 1-0 triumph.

“I think most importantly I have to compliment the players, I think they were fantastic, I think Banda there the goal is unbelievable,” Klate told SuperSport TV.

“The build-up to the goal for me, Aviwe [Mqokozo] there, he’s clever he creates a corner out of nothing. It’s fantastic attitude from the boys, the substitutes again like Wednesday came in and made a huge difference.

“We pull together as a team and we got the results at the end of the day. I told them at halftime it’s never going to be easy when you come into the second-half.

“[Justice] Chabalala absolute beast at the back today, deserved Man of the Match, so ja all in all, I think all the credit must go to the players.”

The key to undoing Orlando Pirates

Klate said the key to undoing Pirates was to be braver and not to allow them to dictate the game.

“It’s all about being braver. We failed to push up our lines, we sit back, the ball goes forward and comes back to us and you have to defend again,” he said.

“When the team is gonna come and press us high, try to setup pressing traps, don’t give them the pressing traps, rather go long, go route one, squeeze into one side and that’s what we did in the second-half.

“We played a lot better in the territories and I always say we were conservative but we always look to create chances on the wide areas, balls in the box, we know they don’t like to defend.

“Obviously when the ball comes into the box, there in the corner, that’s the most important thing for us to walk away with the three points today.”