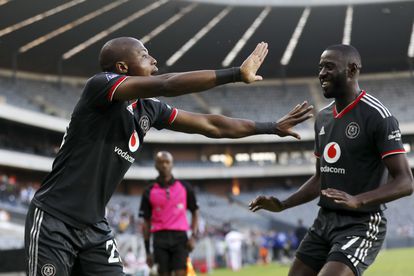 Zakhele Lepasa of Orlando Pirates celebrates a goal with teammates during the DStv Premiership 2022-2023 match between Orlando Pirates and TS Galaxy at the Orlando Stadium, Soweto on 10 September 2022. Image: Muzi Ntombela/BackpagePix

Zakhele Lepasa of Orlando Pirates celebrates a goal with teammates during the DStv Premiership 2022-2023 match between Orlando Pirates and TS Galaxy at the Orlando Stadium, Soweto on 10 September 2022. Image: Muzi Ntombela/BackpagePix

Orlando Pirates welcome AmaZulu to the Orlando Stadium for a crunch DStv Premiership clash this evening.

Jose Riveiro’s side will be desperate to get back to winning ways after going three matches without a victory.

More worryingly for the Mayfair side is the fact that they’ve failed to find the back of the net in all three matches.

AmaZulu on the other hand will be looking to get their account running in positive fashion under new coach Romain Folz.

Action at the Orlando Stadium Stadium gets underway at 19:30. The match will be televised live on SuperSport PSL.