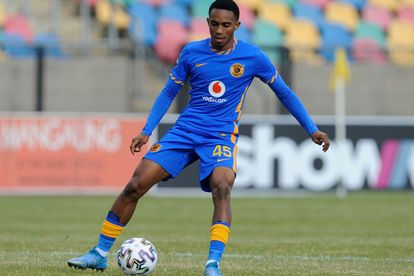 Kaizer Chiefs right-back Njabulo Blom has opened up on dealing with critics, particularly after Amakhosi’s first match of the season against Royal AM.

Blom has had a rollercoaster string of performances since he was promoted in 2019. He is one of the more promising youngsters considering his versatility as he’s equally at ease in midfield.

The Amakhosi academy product was lambasted after a poor performance in the Glamour Boys’ DStv Premiership opener against Thwihli Thwahla on 6 August.

The 22-year-old says being in the team for the past three years has helped him with the ability to handle pressure.

‘IT’S SOMETHING I’M USED TO’ – BLOM ON CRITICISM

“To be quite honest, I think now that I’ve played three seasons for the team, I’m aware that Kaizer Chiefs is a big team and when you don’t perform, that’s what you get from the fans cause they love the team,” Blom told the media in the press conference at the Moses Mabhida Stadium.

“So, it’s something that I’m used to now, I know how to control it and some of the comments they help me a lot to come back stronger.”

Meanwhile, Kaizer Chiefs will be seeking redemption when they take on Richards Bay on Saturday following their embarrassing loss to Masandawana last weekend.

The pressure is on the club’s coach Arthur Zwane who needs to produce desired results soon considering Amakhosi’s demanding fans.

Amakhosi’s opposition Natal Rich Boyz began their debut season in the DStv Premiership in fine style and will be full of confidence heading into the match.

The match is a ‘home’ tie for Kaizer Chiefs, despite it taking place in KwaZulu-Natal at their alternative home ground Moses Mabhida Stadium.