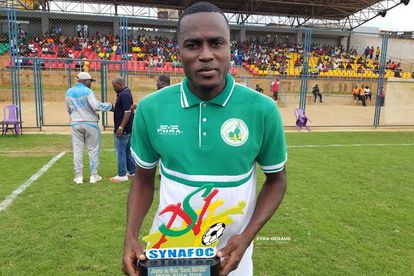 On Friday, Cameroonian football website kick442.com reported that Marou Souaibou – who will form part of Cameroon’s Indomitable Lions squad at the FIFA World Cup – had signed an initial deal worth around R3.5 million plus add-ons with Pirates.

ALSO READ: DINO NDLOVU: ‘WHO WOULD SAY NO TO KAIZER CHIEFS?’

SABC Sport offered further insight to suggest in another report that the 21-year-old will be heading to the Buccaneers after successful negotiations between Pirates and his club Coton Sport.

Apparently Souaibou’s contract with Coton Sport was set to expire at the end of June 2023, but a deal was apparently able to be struck at time when there was the possibility of losing him for ‘free’ during the World Cup.

Yet there could be another twist to this development as Coton Sport have denied he has signed with another team.

“Souaibou Marou player of Coton Sport, has been the subject of several desires for a few months, to date, he has not signed any contract with another club,” the club posted on social media on Sunday.

The talented forward is said to have scored 21 goals in all competitions last season on the way to claiming the 2022 Footballer of the Season in Cameroon.

Interestingly, should this deal indeed by confirmed by Pirates, Souaibou’s arrival would necessitate the departure of at least one overseas-based player as Bucs already have a full quota of five foreigners in Richard Ofori, Kwame Peprah, Olisah Ndah, Terrence Dzuvukamnanja and of course Bienvenu Eva-Nga, who is also from Cameroon.

According to the kick442.com report: “Souaibou will be registered by the Bucs during the January window. Souaibou is currently in camp with the rest of the Cameroon squad. He is expected to travel to South Africa to complete formalities for the deal after he returns from the FIFA World Cup.”

During his career with Coton Sport, the youngster scored 30 goals in 63 games in all competitions, including a winner in the cup of Cameroon final.

ALSO READ: WHEN AND WHERE BAFANA BAFANA WILL PLAY MOZAMBIQUE AND ANGOLA?